« Born in Africa: chances for kids in South-Africa
Portraits of kids in Kurland » 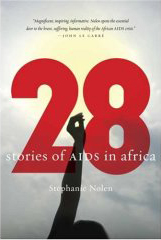 For the past six years, Stephanie Nolen has traced AIDS across Africa, and 28 is the result: an unprecedented, uniquely human portrait of the continent in crisis. Through riveting, anecdotal stories, she brings to life men, women, and children involved in every AIDS arena, making them familiar. And she explores the effects of an epidemic that well exceeds the Black Plague in scope, and the reasons why we must care about what happens.

In every instance, Nolen has borne witness to the stories she relates, whether riding with truck driver Mohammed Ali on a journey across Kenya; following Tigist Haile Michael, a smart, shy fourteen-year-old Ethiopian orphan fending for herself and her baby brother on the slum streets of Addis Ababa; chronicling the efforts of Alice Kadzanja, an HIV-positive nurse in Malawi; or interviewing Nelson Mandela’s family about coming to terms with his own son’s death from AIDS. Nolen’s stories reveal how the disease works and spreads; how it is inextricably tied to conflict and famine and to the diverse cultures it has ravaged; how treatment works, and how people who can’t get treatment fight to stay alive with courage and dignity against huge odds.

Imagine the entire population of New York, Chicago, and Los Angeles combined infected with HIV, and its magnitude in Africa is clear. Writing with power and simplicity, Stephanie Nolen makes us listen, allows us to understand, and inspires us to care. Timely and transformative, 28: Stories of AIDS in Africa is essential reading for anyone concerned about the fate of humankind.